A COMPANION TO TBT EPISODE 05

In our most recent episode of The Book Table (TBT), we discussed Stormdancer, the first novel in the Lotus War trilogy by Australian writer, Jay Kristoff. Marketed as a Japanese-inspired steampunk series featuring what Patrick Rothfuss called “a strong female protagonist” in his blurb, it elicited some very different reactions amongst our discussion participants.

In our online book club, many people specifically picked upon Kristoff’s use of Japanese language and culture, calling it anything from “random” and “uneven” to “frustratingly wrong” and a little bit rage-inducing. The appropriation that formed the foundation of this book drove those familiar with Japanese culture and language to feelings of annoyance and irritation. A few members of our book club didn’t even finish Stormdancer, and a few more said they were unlikely to pick up the sequels.

For my part, I rated the book a solid 4 out of 5 stars and said that, despite acknowledging problems, I enjoyed it. I made a point in the podcast of saying that I had read the entire trilogy back in April 2015 over the course of about a week, so many of the details of all three books often blurred together in my remembering. Though, probably most importantly, I also mentioned that Japanese history and culture are not my forte. My knowledge-base on that topic comes predominantly from media, so I shall never claim myself an expert…ever.

What interested me about the experience of the Stormdancer book club, was that I found myself in the opposite position from when The Book Table discussed An Ember in the Ashes in our inaugural episode: being overly familiar with the Classical, I nit-picked the living daylights out of Sabaa Tahir’s YA debut. I had very few nice things to say about the book, especially in relation to what I considered an appallingly poor appropriation of the Classics. But in the case of Stormdancer, where I can claim little serious familiarity with its source, I was far more lenient and forgiving of faults in the realm of cultural appropriation or, as was said in the episode: an “everything but the kitchen sink” or Wikipedia-style use of Japanese culture and language.

I started pondering a question: can having a familiarity or knowledge-base on a fictional novel’s cultural/historical inspiration have a negative impact upon one’s level of enjoyment or perception of a novel?

Let’s go back to Ember for a moment. To say that I had been hyped for this book is an understatement. Marketed as a standalone YA fantasy, based upon Ancient Rome, I was more than eager to pick up this title. It also didn’t hurt that I was inundated with Penguin Teen’s marketing-hype for that novel for the 6-9 months leading up to its release. There was no escape, and even though I try very hard to ignore marketing and hype for any upcoming release…I got sucked in. I pre-ordered the book on-sight and proceeded to read it the moment it arrived on my doorstep. And, well…

Needless to say my reaction was bad within a few pages. Actually, bad isn’t strong enough a word — I was furious. This wasn’t Ancient Rome! This didn’t even feel Roman-esque! What was this monstrosity?!? (To give you a better sense of just how angry I was, just insert a host of expletives into the above statements.) If Stormdancer was described as “historical elements just thrown in like a poorly-assembled plum pudding”, then An Ember in the Ashes didn’t even make it to the “poorly-assembled” phase of its metaphorical pudding.

After we recorded Stormdancer, I started to wonder what might have happened if I had not known so much about Ancient Rome — if, say, all I knew about it came from the film Gladiator or the HBO series Rome, would my reaction have been so visceral? Could I, perhaps, have enjoyed this novel?

The answer is unequivocally no. Even were I to remove my Classical knowledge-base, I cannot honestly say that I would have “enjoyed” An Ember in the Ashes. The novel was too shallow, with no sense of the world and its mechanics; only one of the two protagonists was inherently proactive or a part of a proactive plotline that affected the overarching plot; and, even then, they both paled in comparison to one side character who should have been the protagonist due to her proactivity; but, worst of all, Tahir’s writing felt lazy and flat. And it ultimately was not a standalone novel, something which only increased the feeling that I had been lied to by the marketing.

But what about Stormdancer?

Contrastly from Ember, I had heard next to nothing about Stormdancer. I think I had seen one booktuber — I believe it was PeruseProject — mention it, and all that had been said in that video was that the they, too, knew nothing about the book except that they thought that it was a Japanese-inspired steampunk novel. For those of you who are unfamiliar with the term, a “booktuber” is someone on YouTube who makes videos relation to books — admittedly, usually YA novels — such as reviews/discussions, hauls, and tag videos related to books.

I ended up buying the first two books in Kristoff’s trilogy from a bargain book website and they sat on my “to be read” (TBR) shelf for something like a year before I finally picked them up. While I admittedly had a few gripes — specifically about some of the character relationships and clunky transitions — I still really enjoyed Stormdancer! It was fun and action-packed with a sassy arashitora (‘storm/thunder tiger’) named Buruu that complimented the female protagonist, Yukiko, that I both enjoyed and wanted to shake by the shoulders in equal measure. My favourite joke to make is that an arashitora is the one mythical creature that I would want more than a dragon which, coming from me, is saying a lot.

In my head, I was running visuals for the action 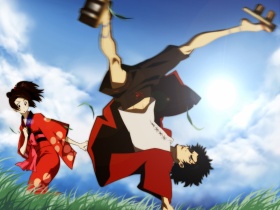 sequences like something from Samurai Champloo, and I am now convinced that if these novels were ever to be adapted to a visual medium, it should be the highly-stylistic and stylized world of anime. But I suppose this makes sense, given that manga and anime are the two primary exposure routes I have to Japan, apart from Japanese cinema — why wouldn’t my mind ultimately jump to something familiar to fill the visual gap? And, again, it brings up the same question, except, this time: did my lack of familiarity with the inspirational material — i.e. Japanese culture, history, language — make it easier to enjoy Kristoff’s trilogy? To imagine like a massive, stylish anime in my head and just have fun?

It’s difficult to answer this question unless I were to go out and suddenly become a master scholar on all things Japan — or go live there for a period of time — but I like to think that I would still enjoy the Lotus War trilogy, because those same things that drove me up the wall in Ember (beyond the Classicist-rage), were not present in Stormdancer. 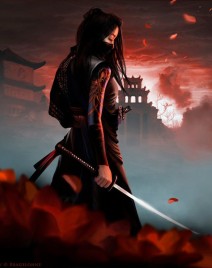 Yukiko was the kind of protagonist I liked. She was a complex heroine — not necessarily “strong,” but complex. “Strong”, here, referring to the call of needing a “strong” female protagonist, which I interpret to mean that all female protagonists become “superwomen” without any sort of flaws. And that, to me, downs their believability and makes them just as eyeroll-worthy as female protagonists with no spine to them. Yukiko sat in that middle-grey area in which I prefer my protagonists to reside: she’s incredibly physically powerful, but still vulnerable; braver than I could be, but still cautious and wary most of the time; and it’s how desperate she is in her determination to live/survive by sheer willpower that I found pretty admirable. No, she’s not perfect — but I don’t want perfect heroines, so I’m okay with that. Yukiko is proactive enough to seem real, and passive enough to not feel like she’s been injected into the narrative for the sake of playing the hero.

Like my fellow TBT discussers, I thought the worldbuilding was a highlight, despite some clunkiness, because it was solid and immersive — something which Ember could not

claim. Stormdancer was also my first dieselpunk novel. A kind of literary relation of the more well-known steampunk, dieselpunk can best be described as combining technological aesthetics of the interwar period through to the 1950s with retro-futuristic technology. Author Scott Westerfeld further argued in an interview that dieselpunk is notably more pessimistic than steampunk — and, when applied to Stormdancer, I agree with that sentiment. But then again, I suppose pessimism was no deterrent for my reading enjoyment, because I immediately carried on with the Lotus War series. I thought Kristoff did an admirable job about showcasing a sense of how his world worked.

That does not mean Stormdancer was perfect — books rarely are — and I’ll freely admit issues I had with the novel and things that irritated me, but it wasn’t the same level of irritation I had with An Ember in the Ashes. Not even close.

I, honestly, have no true answer to my question, no overarching easy-to-sum-up way to, well, sum up. Every book is different, and even more different is the individual’s reaction to any piece of literature.

So I put the question to you: do you find that having a knowledge-base in any fictional work’s inspiration has an effect upon your enjoyment? Do you enjoy it more or less? Are you more or less forgiving?

2 thoughts on “The Curse of Knowledge”