Hello readers and friends! Valentine’s Day is approaching and be sure to tune in to listen to our special Book Table episode about sex in fantasy, which will be released on the 10th! Plus, our very own Dorothy will have a special follow-up post for that day. We also had a nanosode about a married couple who write together- February seems to be the month for talk about romance.

Today, however, I’m going to talk about some of the lessons of romance, love, and moving on that I’ve gleaned from reading fantasy. One of the reasons I love fantasy so much is that as I immerse myself in worlds and their characters, I learn, through empathy or example, so much about life. These are not things one can learn from reading abstract philosophy or history that deals with power struggles and interstate interactions on a scale not relevant to daily life. There’s something about the struggle of a heroic character in fantasy, even when he or she is flawed, that inspires one to be a better person. When you live out a character’s struggles in literature, it sometimes makes you a stronger person.

This post contains minor spoilers for both The Wheel of Time series by Robert Jordan and the second Mistborn series by Brandon Sanderson.

I remember when I finished the Wheel of Time (WoT) in January 2015 — yes, I got to such an important series late — I had mixed feelings on it. Parts of it were breathtaking, but many parts dragged far too much for my taste. However, I grew to appreciate it the more I thought about it and the more I understood what the characters went through over the course of 14 books, especially in regards to love.

It’s a well-established fictional tradition that, if two characters are in love or “meant to be together,” they’ll eventually end up together in what often gets called the “Hollywood ending.” But a major theme in much fantasy is that this isn’t the case; both readers and characters have to accept that such endings aren’t always going to happen.

In the WoT, Rand and Egwene, the male and female leads at the start of the series are almost, sort-of together — by which it is meant that they were at the courtship stage and everyone expected them to get married. By the middle of the series, they aren’t. They realize they actually never really loved each other. Do we, in real life, sometimes develop feelings for other people because we feel we have to, or because they’re available?

Rand and Egwene thought as much because they grew up together in the same village and everyone “expected” them to get together. But then they met other people and went down disparate paths. Why? As Jason Denzel points out at Tor.com,

“Another recurring theme [in Wheel of Time] that is becoming more and more apparent to me is that of acceptance. Accepting the fact that times change. That what you need in life isn’t always what you want in life.”

And that means, it isn’t always about the perfect “Hollywood ending.” You’re not always going to get what you want, and this isn’t a bad thing either because you can make the most of it instead of trying to fight for a lost cause. Eowyn loved Aragorn in the The Lord of the Rings, but that was not reciprocated. Eventually, she found love with Faramir instead of trying to force her way into the Aragorn and Arwen relationship. 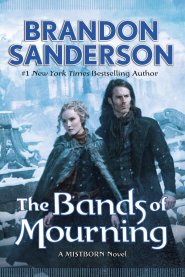 This lesson is so beautifully conveyed in Brandon Sanderson’s latest Mistborn work, The Bands of Mourning, which is the third book of the second Mistborn series. I just finished reading this novel, and I highly recommend the series to everyone. Unlike WoT, in Mistborn, while the main character, Wax‘s world expands due to travel and knowledge. He seeks solace not in a partner with a mind for adventure, but for more of a homebody; he needs balance and a foil. When he unexpectedly becomes the heir of a large noble house, Wax contracts a marriage with Steris, a humorless noblewoman, as a marriage of convenience.

Throughout the series, he grows close with Marasi, Steris’ half-sister, who shares Wax’s interest in busting up criminals. Later on, she falls for him. Yet Wax chooses Steris eventually. Why? Because although the sparks weren’t there at first, Wax realized he needed someone to be there for him as a steadying presence; someone beyond the passion and excitement, beyond his emotional wants. And so Wax moves forward with his relationship with Steris and they develop a sort of unsaid understanding based on gradual understanding and acceptance which does eventually become love. This echoes the relationship of Ned Stark and Catelyn Tully after their marriage in A Song of Ice and Fire. Wax could have gone with Marasi, but she too closely resembled him and his previous lover. And he knew he didn’t need that again.

This is the lesson of acceptance, moving on, and love that I gleaned from fantasy: sometimes you think a certain type of person is the right person for you, or that you really want someone only to discover that maybe you needed something else all along.

Readers, what were some of your favorite romance or relationship lessons from fantasy literature?

One thought on “What Fantasy Taught Me About Love”