Alright, I’ve got a bit of a confession to make: I don’t exactly hate the bad boy trope.

I’m as guilty as the next person of finding the bad boy in literature interesting and, even at times, a wee bit irresistible. He could be a protagonist, he could be the antagonist — either way, if there’s a bad boy, he’s a little hard to miss.

There is, however, a very particular bad boy to whom I have never felt an attraction: Aleksander Morozova, The Darkling.

SPOILER WARNING: This post will contain some minor spoilers for the Grisha trilogy by Leigh Bardugo. Read on at your own risk.

Meet the baddest boy of the Grisha-verse, a Russia-inspired fantasy world written by Leigh Bardugo in her bestselling novels Shadow & Bone, Siege & Storm, and Ruin & Rising. While initially introduced as a dark hero-type character and saviour (of sorts) to our protagonist, Alina Starkov, he is quickly revealed as the ultimate antagonist of the trilogy by the end of the first novel. The Darkling is handsome, described in Shadow & Bone as a young man with ink-black hair and quartz-grey eyes to accompany his sharp, beautiful features; but even moreso, he’s dangerous in an incubus-like way, with a powerful natural charisma that draws people to his blend of mystery and seduction.

He also, as you can imagine, has a particularly large fanbase. Upon the conclusion of the Grisha trilogy, I noticed widespread disappointment amidst fans not only at the “final pairing,” but of the fate of the Darkling. As for me? Well, it is Young Adult fantasy, so I wasn’t particularly surprised at the ultimate fate of Aleksander Morozova and actually found the symbolism of that climactic moment actually well-played.

But the backlash? It was far more intense than I would have anticipated, and for what I think is one core reason: Alina did not end up with The Darkling.

COME NOT BETWEEN THE SHIPPERS AND THEIR OTP

When I initially reviewed the entirety of the Grisha trilogy back in 2014, I made a point of saying that I never shipped Alina and the Darkling, not even when he was masquerading as a “good guy” in the first book.

“Shipping” is a term that originally derived from the word relationship and is defined as a desire by fans for two or more fictional characters to be in a romantic relationship. A very important aspect of shipping is that of the “OTP,” an abbreviation of the phrase “One True Pairing.” This is a deeply important part of fandom, as to deem a ship OTP is to declare a deep emotional investment in it beyond any other potential ships. It is a fan’s be-all, end-all for that particular piece of media; when people disagree over their OTP, this can lead to what’s called a “ship war.” A good example of that would be the “Team Edward” vs “Team Jacob” phenomenon that occurred with the Twilight Saga by Stephenie Meyer.

Like I said: I never shipped Alina and the Darkling mainly because, well, it seemed more than a tad obvious that someone named the Darkling was going to be the villain in a world where the largest threat is a place called the shadowfold. I had him pegged as the antagonist from the start, and found little-to-no redemptive qualities within his character to make me feel otherwise or even begin to consider shipping him with Alina. Despite all her flaws — and she has many — Alina was still, at her core, a decent human being and the Darkling was not.

Let me say this: I don’t get involved in ship wars — let people ship whomever they want in peace because, you know what? It’s not going to affect whom I ship in the slightest. And the same applies here: if people wish to ship Alina and the Darkling, I am in no way saying that is a bad thing or that they shouldn’t. Honestly, if you’re a Darkling and Alina shipper, that is your right as a human being with thoughts and opinions of your own and I am in no way judging or telling you otherwise.

I would, however, like to examine why this idea bothers me, because it does tie into another massively-popular fictional “bad boy” villain who has a massive, almost cult-like following, especially online. 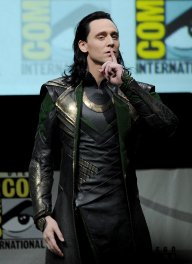 Yes, Loki. Now, my examination of Loki shall be brief, as I’m fairly confident that most of the Loki-love is related to his current portrayer, Tom Hiddleston. Because of Mr. Hiddleston’s charm and general niceness — something to which I can attest, having witnessed it firsthand — the audience projects these attributes onto the Loki character and, as a result, begins to romanticize him. This is something that’s called the “woobie effect,” which can be seen across many fandoms that involve fictional bad boys.

For those of you who’ve never heard this term, the “woobie effect” is defined as an audience-driven phenomenon, usually divorced from the character’s canonical morality, in which one feels particularly sorry for a character. In layman’s term, that character makes you say: “Aw, poor baby!” This is even if the character is, say, a

complete jerk or even bent on world destruction.

Again, let me reiterate: I’m as guilty as the next person of “woobification” — get me started on The Phantom of the Opera and you might end up highly questioning my morals. Just kidding — I actually can freely admit that Erik (The Phantom), especially in Leroux’s original novel, is a bit of a raging, homicidal psychopath. But add Andrew Lloyd Webber’s music into the mix and I’m morally hopeless because awww, poor baby!

Because of this effect, the villain becomes a romantic figure, someone to be loved and not loathed. The reader begins injecting and/or projecting redemptive qualities onto the villain, whether or not they’re actually there. I can’t pinpoint the exact start of this trope, though I do think that a classic character such as Heathcliff from Emily Bronte’s Wuthering Heights is a fantastic early example. 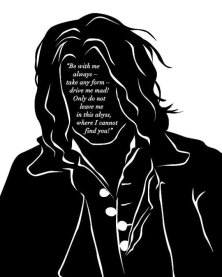 For those of you who have not read this work, Heathcliff is often regarded by literary criticism as an archetype of the “tortured romantic hero,” with his all-consuming passion, especially for Catherine Earnshaw, as his hamartia (ἁμαρτία). First brought to light in Aristotle’s Poetics (Περὶ ποιητικῆς), a character’s hamartia is often described as the inner quality that initiates the protagonist to commit actions which drive the plot towards its tragic end.

Guess what’s the main effect of a hamartia? To inspire in the audience a build of pity and fear that eventually leads to a catharsis.

If Heathcliff’s hamartia is all-consuming passion, that doesn’t sound particularly villainous on the surface. Yet he is the novel’s antagonist, where he, “in deed, stands unredeemed,” because although his passion for Catherine Earnshaw, even after her death, may be seen as romantic, passion swings both ways and Heathcliff is ruthless in his determination to destroy those who degraded him as a child, including Catherine. He is vindictive, violent, and cruel to degrees that popular literary criticism questions whether or not Heathcliff is damned, as the uncertain fate of his soul at the conclusion of the novel leaves the debate of anti-hero versus villain alive and well.

EVERYBODY WANTS TO RULE THE WORLD

I think, perhaps, it is because of what he was trying to accomplish within the series. Sure, Loki wanted to rule the world, but the Darkling did not just want to rule the world; he wanted to end it. He wanted to decimate an entire portion of the Grisha-verse population through a magical extermination.

If this sounds familiar, that’s because it bloody well should, and not just because of characters like Voldemort in J.K. Rowling’s Harry Potter series. Sure, Voldemort wants to rule the world, to assert the power of the “pureblood” over anything else. But, again, I cannot stress enough that The Darkling does not just want to rule the world: he wants to exterminate a large percentage of its population.

And so did Hitler, so did Stalin — but you don’t see readers romanticizing those two historical figures. Sure, when we as a modern generation look at these men with the 20/20 vision of historical hindsight, we can’t in any way understand how so many people could be under the thrall of these two men. But to their respective peoples, these men were both powerful and wildly charismatic. Not only that, both of these men used their powers of charisma to build sizable empires: to actually advocate the eugenics-like destruction of certain people and be cheered for it. They spoke well, they mastered propaganda, and they drew people to them with an almost inexplicable magnetism.

WHAT IS IT ABOUT THE BAD BOY?

Is it because The Darkling is young and described as objectively handsome, or is it, even, the sexual component? As a character, The Darkling owes more to Bram Stoker’s eponymous vampire than many readers might

realize. Young Adult literature, as an unofficial rule, usually features sexual tension between characters. This is understandable, as an important part of the teenage experience is how one interacts with others, especially those with whom one feels an emotional connection and/or sexual attraction. And the sexual tension surrounding the Darkling is not exactly subtle.

He appears to Alina in her dreams, sometimes even as a waking vision thanks to the magical bond into which he forced her in the finale of the first novel. As a result he leeches off of her powers, but using primarily seduction and charisma as opposed to brute force — not that he has any problem with violence — because, at his core, he is a master manipulator. I can’t help but be reminded of Dracula or Dorian Gray when writing this. Here are two undisputed villains of fiction who are frequently romanticized and “woobified’ into just romantic “bad boys.” You could, however, also argue that the Darkling is far worse than either of those two characters, as his body count is significantly larger.

So what is the danger in romanticizing the Darkling? By losing sight of the villain’s true depravity and just reducing him to someone who was just “lonely and depressed” and “aww, poor baby!”, then one loses sight of their danger. To join a villain’s cult of personality is, arguably, no better than the hordes of Germans who joined the Nazi party, or the Russians who joined under Stalin.

Yes, I think it’s important to find these villainous characters complex — to find them intriguing and complicated. And, sure, I think it’s fine to go ahead and feel attracted to them, especially if allure is one of their weapons of choice. That is, after all, a bit of the point.

But I also think it’s important to not romanticize these villains to the point that one ignores their darkness, their depravity or their horror. That is how the dark rises: not with a beastly roar, but a charming smile.

“The greatest trick the Devil ever pulled was convincing the world he didn’t exist.” (The Usual Suspects)