These are a few of my favorite things.

These are a few more.

But I have to read different genres to get my fix of both, right? After all, aren’t science-fiction and fantasy often shelved separately (albeit, next door to each other) in libraries? Actually, not always. It’s one of those cases where it does depend upon the library or bookstore in question: some separate them, some don’t. Some places might not even bother to separate them out from general fiction! In the latter case, I suppose that would help the argument that there are definitely stories that blur th esoteric line between science-fiction and fantasy, but it also goes to show that not everybody agrees on this. As for me, I’m always delighted when I encounter something that has elements of both science-fiction and fantasy.

An example that I was exposed to fairly young is the Star Wars series: yes, we are on space ships, there are aliens and laser guns and high-tech prosthetic limbs, but there is also The Force, a mysterious power that only a few have, that requires intensive training to develop, and isn’t easily explained by science or technology. Star Wars also has ghosts and prophecies — or, as Han Solo would call it, “hokey religions and ancient weapons.”

I would directly contrast this with Star Trek. Yes, some alien species have abilities that seem supernatural to humans (Vulcan mind-meld, anyone?), but it is because of their cultures and genetic makeup, not a learned magic. It is explained away by “they’re aliens,” rather than “it is a great and mystical secret that some can learn and some cannot,” which puts Star Trek firmly in the sci-fi bin.

On the Fantasy end of the spectrum, we have series like The Lord of the Rings and Harry Potter: there is magic, there are different races of sentient beings (elves, dwarves, house-elves, giants) but they are not ‘aliens,’ there is basically no technology (unless you’re Mr. Weasley and fascinated by Muggles) and no hard science.

I love both genres, I really do, but I especially love when they mix and mingle.

A childhood favorite science-fantasy series is Artemis Fowl. There is a secret world of elves, dwarves, goblins, and centaurs that co-exists with a human world very similar to ours. Artemis, being a smart, modern teenager, decodes these other species’ writing using a computer program. However, instead of being simple creatures of magic and swords, these elves fly with mechanical wings and fight with big guns that are far more advanced than anything in human society. A centaur plays the role of providing gadgets and technology — oh yeah, and this mixed crew engages in heists and inter-species warfare. If that’s not an example of blending genres, I don’t know what is!

Another wonderful example is the webcomic Gunnerkrigg Court. “What!? A webcomic?” you ask? “I thought this was a blog about books!” you exclaim? Well, we do often talk about books, and The Book Table is a podcast focused on books and writing, but here at Backroom Whispering we’re fascinated by storytelling in a few different forms — after all, we’re currently working on our own fiction podcast, which definitely isn’t a book! Anyways, Gunnerkrigg Court follows a young girl named Antimony Carver, who goes to school at a place called Gunnerkrigg Court that resembles an industrial complex, surrounded by robots. She takes classes on physics and chemistry, has a ‘field trip’ including a simulated 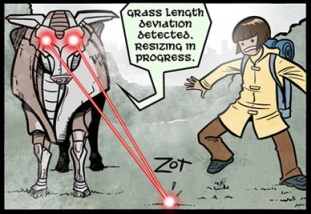 space mission, and oh yeah…. there are laser cows.

But despite all this, Gunnerkrigg Court opens with (this isn’t a spoiler… it’s on the sixth page/strip) our main character deciding to build a robot…to carry the second shadow that she has mysteriously sprouted across the bridge into what is essentially a Forbidden Forest. That’s not straight sci-fi! Neither are things that happen later including spirits inspired by both medieval European and Native American mythologies. Finally, some characters have stones that serve to amplify magical powers but also help them activate or interact with different technologies. It’s a bit of a clumsy explanation because I don’t want to give too much away — I think everyone should have the opportunity to discover Gunnerkrigg Court as I did, with a ‘what the heck is gonna happen next’ mindset.

A few more examples that friends thought up include Brandon Sanderson’s second Mistborn series, where magic interacts with things like guns and spaceships; Warhammer 40k, a turn-based tabletop game featuring orcs, elves, and interplanetary combat; and Dragonriders of Pern, which  involves both dragons and dangerous microorganisms from space. There’s another comic (that started as a webcomic) called Nimona, where shapeshifters and mad scientists coexist, not to mention the majority of classic superhero narratives, which can blend aliens and radioactive powers with witches and warlocks.

So what do you think? Do you prefer your space travel with a side of sorcerers? Or would you rather they stay separate?

(Header image is from the Artemis Fowl graphic novel and is (c) Eoin Colfer, Andrew Donkin, and Giovanni Rigan)