As you may well be aware, Game of Thrones, HBO’s television adaptation of George R.R. Martin’s A Song of Ice and Fire series, returned to television for its sixth season on April 24th in what can probably be accurately described as one of the biggest television events of the year. People gathered for viewing parties, some set their DVR, and others, like my flatmate and I, carved out our 9PM EST hour as “Unavailable for Consultation.” It is a church-like ritual, in which our butts are placed upon a couch and our eyeballs glued to the

Except, this year, we added cupcakes to the mix.

The trend of “artisanal cupcakes” is popularly linked to “the moment Carrie Bradshaw and co stepped into the 1950s-styled Magnolia Bakery in Manhattan and ordered a cupcake in Sex and the City in 2000.” And while it has certainly quieted in recent years, unique and sometimes downright peculiar cupcake combinations are still popular. In the Fan district of Richmond, VA, there is a pink-painted building that houses Carytown Cupcakes. Specializing in “creatively-inspired cupcakes made with all-natural ingredients,” this confectioner opened its doors in 2009, and features 16+ flavours per day with at least 2 vegan and 2 gluten-free offerings. They accomplish this by having at least 9-10 “classic cupcakes” and then (usually) 6 specially-themed cupcakes.

As you’ve probably guessed, their special theme through May 1st was Game of Thrones. What amazed me was not that somebody would decide to make cupcakes inspired by various Thrones characters and foods — after all, there are plenty of cookbooks on the topic — no, it was the creativity with which they concocted these confections. 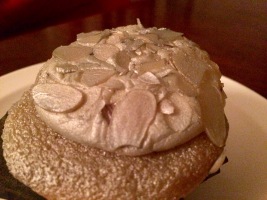 GREYSCALE: …an Earl Grey tea cake, topped with almond buttercream, dipped in toasted almonds. It’s almost hilarious that someone would create a cake based on this deadly Westerosi disease. Described as rendering flesh stiff and dead, greyscale leaves its victims’ skin racked and flaking, mottled black and grey and stone-like to the touch. Hence the decoration upon this cupcake, and likely the inspiration to utilize a cake made with Earl Grey tea.

For those of you not entirely familiar with tea, Earl Grey is a black tea blend that has the distinct flavour profile of oil from the rind of bergamot orange, which can best be described as a citrus cocktail: orange and lemon, with notes of grapefruit and lime. Strong as a liquid, yet when baked into this cake, it was subtle to the point of being nearly obliterated from my palate by the almond buttercream. I love almond, don’t get me wrong, but almond extract is surprisingly strong — pair that with the toasted almonds and it’s just too much for the tea to handle.

Overall, the cupcake was subtle and light, rather like whatever shreds of humanity remain within the victims of greyscale as the disease rots their brain — but when eaten with the almond buttercream and toasted almond topping, the tea flavour disappeared almost entirely. Thus are greyscale victims consumed by their disease.

MOTHER OF DRAGONS: …a spicy chocolate cupcake with spicy chocolate buttercream, topped with 3 “aged” dragon’s eggs. It actually took my flatmate and I something like three stops into Carytown Cupcake in order to find this particular confection — yeah, it was that popular. And, honestly, who’d be surprised? Danaerys Targaryen is one of the most prominent major players from the television show, and one that inspires endless amounts of creative work, including, obviously, cupcakes.

The spicy chocolate cake was a dark chocolate — as opposed to milk or white —  with hints of cinnamon to complement the chili that come through at a warmth that sparked on the tongue with just enough heat to add flavour, but not overwhelm the richness of the chocolate. Essentially, it was a Mexican Chocolate Cake, but in cupcake form. Full disclosure: I’m not a huge chocolate hound — but the addition of cinnamon and chili to this cake had me head over heels. That little bit of heat evoked the fire of Drogo’s funeral pyre, into which Daenerys walks almost Dido-style in order to reanimate the three dragon’s eggs she had received as a gift from Illyrio Mopatis. This cake featured them as well, though they were little more than milk chocolate eggs in a speckled candy shell.

This cupcake caught a specific flash in time from the series, the moment that really “birthed” Dany, for lack of a better term, as we know her and have watched her grow through the seasons.

PIGEON PIE: …a vegan vanilla cupcake with graham cracker crust, filled with mixed berry pie, decorated with brown sugar buttercream to resemble a crust and topped with a pigeon-shaped “pie-crust” pastry garnish. Okay, yeah, I know what you’re probably thinking: there’s no way in seven hells that this vegan cupcake is any good. Well, I’ve got to tell you, I’d happily have this thing served at my own wedding. Pigeon pie appears rather infamously within Thrones as traditional wedding food fare — for the nobility, at least. It also, interestingly enough, is a savoury dish, filled with meats and spices.

Putting it down a sweet route produces something just as tasty, but different. The “vanilla” cupcake gets air quotes around the vanilla because I didn’t quite taste it inside the cake. I think this is due to the graham cracker base, which provided a delicious, buttery flavour that actually made me think of homemade pie crust. This is likely due to the sugar-honey mixture that is used to sweeten the flour and bran base for any graham cracker. Because this was a vegan cake, it did not possess the light, fluffy quality that most people associate with a traditional cupcake; this was a little heavier, though no less delicious, especially when stuffed with blueberries and raspberries.

I couldn’t help but think of the colour Joffrey turned when he was choking on the poison that killed him — the very reason his wedding became known as the “Purple Wedding” — and whether or not that’s what the bakers were going for. The mini pigeon pie on top of the cupcake didn’t hurt either 😉 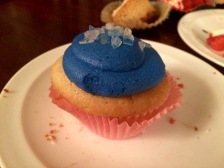 WHITE WALKER: …a gluten-free mint cupcake with fresh mint buttercream topped with chunks of blue “ice” rock candy.  Without question one of the strangest and most creative cupcakes. Dyeing something blue and relating it to the Wall is an obvious way to go, but Carytown Cupcakes did something a little different with the integration of mint into their cupcakes. And not mint extract, but fresh mint. It may sound a hair snooty to say there is a difference but, well, there is.

I, personally, have found that fresh mint requires less added sweetener to it than its extract, and Carytown Cupcakes made a smart move in pairing the herb with vanilla. If I had to guess, they did this for both the cake and the dyed frosting. The best part of this decision is that the entire cupcake was not nearly as sweet as it could have been, and when you’ve got rock candy — basically chunks of hard sugar — on top, you run the risk of the cupcake being cloyingly sweet.

Instead, there is just a nice rush of mint, which reminds one of the icy air of the North and that, indeed, “Winter is Coming.” It’s certainly a cupcake that some may not enjoy — my flatmate didn’t — but I was, oddly enough, a fan. 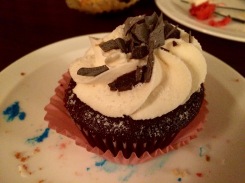 JON SNOW: …a chocolate espresso cake, stuffed with a dark cherry kirshwasser filling, topped with whipped cream icing, garnished with chocolate shavings and sweet snow. Ah, yes, the cake about which we should, arguably, know nothing. Oddly enough, this cake wonderfully summed up the differences between mine and my flatmate’s differing reactions to Jon Snow.

She loves Jon Snow; I am apathetic towards him. She loved this cupcake; I liked it, but didn’t love it.  Chocolate espresso is one of my favourite flavours, so I was particularly excited for this cake, but I do think it could have benefited from more espresso in the actual cake batter, as the chocolate, deliciously dark as it was, overpowered the espresso component. But, ultimately, my issue with the cake was that I don’t much care for cherry filling, even if you soak it in alcohol, as this cake did with the kirshwasser (“cherry water”): a cherry-based fruit brandy. Even if I did like cherry filling, I would have told you that this flavour overwhelmed the chocolate espresso cake.

In the end, my flatmate loved it and wanted more. I shrugged at it, and wasn’t all that sorry to see it go. Maybe I just know nothing.

RED WEDDING: …a red raspberry cake, filled with raspberry compote, topped with vanilla buttercream, garnished with black swords and blood splatter. Like the White Walker, Carytown Cupcake could have easily phoned in this cupcake. Red velvet, boom. I mean, honestly, doesn’t that seem the obvious choice? I can’t help but give some kudos to the baker for choosing to try something different to create this treat.

A fruit-infused or flavoured cake is not something that I eat often, mainly because the flavours are usually artificial and the cake comes out cloyingly sweet. In this case, the fact that actual fruits and their juices were used made the cake almost tart, though tempered by the vanilla extract that was likely a part of the cake batter. However, when we come to the buttercream, I sense a misstep: it’s too sweet. A cream cheese frosting, less sugary and complimentary to the tartness of the cake might have been best for the flavour profile.

However in terms of evoking the Red Wedding, it certainly achieves the feeling that something is a little off — not quite right, as it were. I suppose the buttercream is the “Rains of Castermere” of this wedding cake. At least they left me some swords.

What are some of your favourite fanmade concoctions or confections that you’ve ever had? Have you ever tried to make something based on a favourite piece of media?

One thought on “Confectionary Fandemonium”