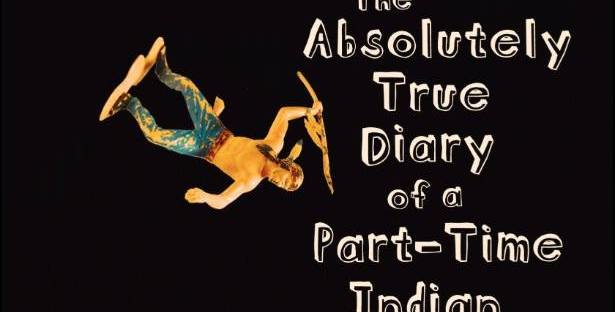 Here’s why I find the arguments against Part-Time Indian pretty crazy: I grew up relatively sheltered. I went to a private elementary/middle school with small class sizes in a homogeneous suburb. I went to church where almost everyone was of the same race and economic class as my family. I didn’t watch MTV and the Internet wasn’t a big part of my life until High School. But somehow still, by the time I was 11 or 12, I had heard every sexist, racist, ableist, and homophobic slur in Part-Time Indian, and then some. Kids talk. They hear things from family members, or they experience things in real life: a reason people complain about Part-Time Indian is the references to alcoholism and alcoholic characters. Guess what? There are 10-year-olds who know that Daddy isn’t part of the family anymore because of his drinking problem, or that Aunt Linda stares off into space instead of talking to the family because she made bad decisions when she was younger. They talk about it to their friends. Kids learn about different races and religions in elementary and middle school; even in my sheltered and relatively homogeneous environment there were Muslim kids who had to constantly explain their fasting during Ramadan and Black kids who got picked on for having a different hair texture. Current events, like Presidential elections and Black Lives Matter protests, make the news and students talk about them or absorb some of the vocabulary or opinions into their everyday speech.

As much as some parents would like to believe that their children are innocent and know nothing about the world, chances are good that somebody at the lunch table or on the playground has said most of the things mentioned in Part-Time Indian.

I think the “erections, masturbation, and alcoholism” arguments may be easy scapegoats for other reasons parents might not want their children reading this book. It discusses some heavy racism and the difficulty of life on a Reservation for Native American/American Indian people. In a world where history classes sometimes gloss over these issues with a ‘and then the Natives decided to move West and do their own thing,’ it’s important to confront the reality. People were forced to leave their homelands and settled in the middle of nowhere without economic or educational opportunities. Reservations, to this day, experience high rates of unemployment, alcoholism, domestic abuse, and poverty. This is real life, and at age 10, 12, or 14, kids are ready to learn about it.

Then there’s the fact that other childrens’ books feature worse.

Remember the part in Harry Potter where young students endure mind control… in class? Or are tortured and have racial/blood-status slurs carved into their flesh? Or all of the family members who are brutally murdered? A love potion akin to a roofie? Why can students read and love and discuss books featuring an evil man who tortures and kills schoolchildren on his way to world domination, a wizarding culture that shuns people based on blood status and enslaves House Elves? Why is all of this acceptable but a real kid talking about masturbation isn’t? (Of course, Harry Potter has been banned and challenged, but most of the time it’s not for these reasons – Rebecca will discuss this in a blog post later this month.) Do these parents show Disney movies to their kids? Mulan features war and a whole village destroyed! Beauty and the Beast has a young woman choose between a chauvinistic human and a literal monster who holds her prisoner! There’s a jive-talking bird in Dumbo literally named Jim Crow! Don’t even get me started on the portrayal of “Indians” in Peter Pan!

I’m certainly not arguing for Harry Potter or Disney movies banned, I’m arguing for them a variety of media that addresses a variety of issues to be allowed and embraced by young readers. Kids learn to read, and then they read to learn.

Please Note: All links to books available for purchase through Amazon are affiliate links, which means Backroom Whispering Productions receive a small percentage of the sales made through that link.

One thought on “The Absolutely True Story of a Banned Book”