2016 was a big year for me because it was the first year where I was active enough on Goodreads to participate in a reading challenge and to watch as my numbers went up and up and I finally met that 150 books read goal. Goodreads is also nifty because it keeps track of the books you’ve read for you, so now that we’ve hit 2017, I get to go back and look at what I read in 2016 and reminisce.

If I’m totally honest, about half of those 150 books were somewhere between “meh” and “NO!” on the scale of enjoyment, but the other half were a real treat. That’s maybe the advantage to pushing through about three books a week — yeah, you find lemons, but you also find gems. Lots of them.

So many, in fact, that it was quite difficult for me to land on a single book to talk about. So before I go an wax lyrical about Illuminae, I’d like to give a shout out to a few of the other fantastic books/series I was lucky enough to experience in 2016. Here’s to you, The Raven Cycle, so beautiful and pure in your spot on my favorite’s shelf. I love you. And here’s to you, Red Rising trilogy. Thank you for rekindling my husband’s love of books. Cheers to Six of Crows and Crooked Kingdom, y’all rocked my world. I’ll raise a glass to you, Menagerie, one of the coolest creepy little things I stumbled upon. And a toast for the books I’d already loved that I got to love again in 2016, from the Harry Potter series to A Series of Unfortunate Events to Sandman and down to a wide array of Juliet Marillier classics. Annnnnd one final shoutout to the 40ish books that did not make this list but were also fantastic and provided many feelings and great joy to my year. 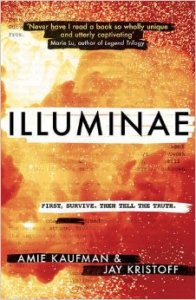 And now, to the main event.

Man oh man what a book. It’s difficult to even know where to begin with this because reading Illuminae was such an experience, but I shall try.

First, this is not a traditional book. Rather than straightforward narration, Kaufman and Kristoff tell this story through a series of IM chats, data files, reports on security camera footage, classified military files, and eventually information from the server core of the main AI unit, AIDAN.

While I’m usually impressed by clever forms of narration like this, I don’t often read them because I’m a trandtionalist with books. I like them to be straightforward narration style. But the style of this book could not be more perfectly done. The execution was brilliant, the use of tiny visual details superb, and the lack of straightforward narration did absolutely nothing to take away from the emotional impact of the story. It was a wild, fun, emotional, and intense ride.

Seriously, I was invested within the first 30 pages and I spent this entire experience caught somewhere between laughter and genuine tears. Illuminae is funny, it’s fun, it’s intense, violent, and fast-paced, but it is also deeply philosophical and altogether incredibly emotional. AIDAN, the possibly insane AI of the Battleship Alexander, really takes the cake on this. I simultaneously hated it (you know, ’cause of psychotic AI things) and favored the parts of the book from its perspective because that’s where many of the most poignant moments were delivered, and flawlessly.

The main two characters, Ezra and Kady, are both phenomenal. Kady is everything I ever wanted in a snarky space heroine, and Ezra is just bae. Their backstory and their development throughout the book was incredibly compelling and just absolutely wonderful.

Illuminae was literally everything I could ever have wanted from a book. It was a fantastic escape, a brilliantly imagined alternate reality that somehow felt familiar. It engaged me with characters that were both human and otherwise and got to that part of me that genuinely cares about those characters even while I rationally know they don’t exist. It got me thinking about the big questions without being too heavy-handed about it and without trying to provide any answers. It was one of those books that provides the entertainment you want from leisurely reading while also encouraging you to think about the world you live in and the nature of the things you know.

Illuminae, I adore you.

(I also adore Gemina, the sequel that this blog post would have been about if I’d read Illuminae in 2015 when it was released).

But seriously, hat’s off to Kaufman and Kristoff for this delightfully wonderful thing, and thank you 2016 for bringing Illuminae to me. A+.