Recently, a book club associated with BWP read The Dispossessed by Ursula K. Le Guin. While I had overall mixed feelings about the book (the summary: it was a bit too academic and philosophical, and not enough plot for my taste), one thing did strike me and remind me of one of my favorite books of all time. Shevek, our protagonist and genius physicist, happens upon a tidbit of knowledge (in this case, learning the language spoken on a different planet) that flips his life upside-down. This situation reminded me heavily of Montag in Fahrenheit 451, who has a random urge to take a book home with him, and discovers a universe of knowledge and an intellectual revolution. In this post, I’ll talk about how reading and learning new things can change your life forever.

END_OF_DOCUMENT_TOKEN_TO_BE_REPLACED

Voiceovers in TV and movies are, as Rebecca wrote in her Outlander post on Monday, a great way to transition a first-person story to the screen. I think they are especially relevant in books adapted to movie or TV because people who have read the books know more about the characters than people who only watch the movie or TV show. However, I think some adaptations pull this off better than others: some movies/shows use too many voiceovers, explaining the scenes when they’re already obvious, and some use too few, leaving viewers to wonder what the characters’ motivations are. In today’s post, I’d like to talk about the two ends of the spectrum.

This post will contain spoilers for the book and TV versions of Outlander and book and movie versions of The Hunger Games.

END_OF_DOCUMENT_TOKEN_TO_BE_REPLACED

What do you think of when you hear “young woman protagonist in a YA dystopian novel?” Do you think of Katniss Everdeen from The Hunger Games, not terribly ladylike, bowhunting for meat and enemies, reluctantly leading revolutions in a gray or black uniform? Or maybe Tris Pryor from Divergent, learning to fight and getting tattoos to blend into an aggressive, military-esque faction in her divided society, despite her more gentle nature? Although their worlds are different, these characters have some similarities, primarily in the challenges they face: they need to run, jump, fight, shoot, and participate in other activities that wouldn’t be too far out of place in military boot camp.

But there’s another breed of dystopian women, whose battlefields are bedrooms and boardrooms, whose strengths are in flirting, networking, and perhaps even…. birthing? I’m talking about women like America Singer from The Selection, Mare Barrow from Red Queen, and twins Harmony and Melody from Bumped. Obviously, there are some overlaps: Katniss and Tris do have romantic moments, and Mare has some action sequences, but distilled to the books’ elevator pitches, there do seem to be at least two types of dystopian women: the fighters and the talkers. It’s more of a spectrum than a binary, but all dystopian women must be flexible in a world that is changing around and against them.

Please note: this post may feature minor spoilers from the series listed above, though I will try to keep them about overarching themes rather than specific events.

END_OF_DOCUMENT_TOKEN_TO_BE_REPLACED 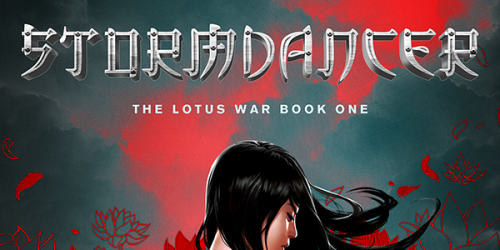 In this episode we discuss the “Japanese-inspired Steampunk dystopia” novel Stormdancer, by Jay Kristoff. We liked parts, but weren’t so enthused about others – let us know what you thought, listeners!

For listeners of The Book Table, Audible is offering a free audiobook and a 30-day free trial! Sign up at http://audibletrial.com/TheBookTable.

Stormdancer is availble from
Amazon, Barnes & Noble, and Audible.

The Book Table is a podcast from Backroom Whispering Productions. Our theme music is by Mark Wayne.